Many of Van Dokkum’s paintings contain mild social criticism. Marius van Dokkum is averse to cynicism, he wants to give the audience a (laugh) mirror.

As a child, Van Dokkum already knew that he would become an artist. It was no surprise to the other family members. He did nothing but draw. His parents have never had a hard time getting him to the art academy. They had the idea that you would learn painting techniques there. With that expectation, Van Dokkum also went there, but he had to adjust his image quickly. Realism was then taboo, you had to experiment.

Because he continued to give preference to realistic work, he received the advice to continue as an illustrator and designer. And he did not regret that. He learned to draw well and he says: “I was later taught by colleagues, such as Henk Helmantel. His work hit me like a bomb. The vision that realism was out of time was contradicted by his paintings. They were very realistic and at the same time of a great artistry. ”

A little forced, Van Dokkum chose a paid job after the academy. His scholarship stopped and there had to be bread on the shelf. He was offered a part-time job at a paper factory in Ugchelen. The fixed income made it possible for him to spend the rest of the week doing things for himself. Van Dokkum still works there, about ten hours a week in the morning hours. “That gives a bit of structure in my life”.

Van Dokkum also maintains contact with society through his work. “In such a factory you can see everything: from the director to people in the workplace. If you paint a lot of people, you also have to deal with people “.

Van Dokkum was inspired by, among others, Sierk Schröder, Henk Helmantel, Maarten ‘t Hart (the painter, not the writer) and by old masters such as Rembrandt, Hans Holbein, Jan Steen and Jan Vermeer. Diego Velazquez, court painter to the Spanish King Philip IV, also fascinates him. 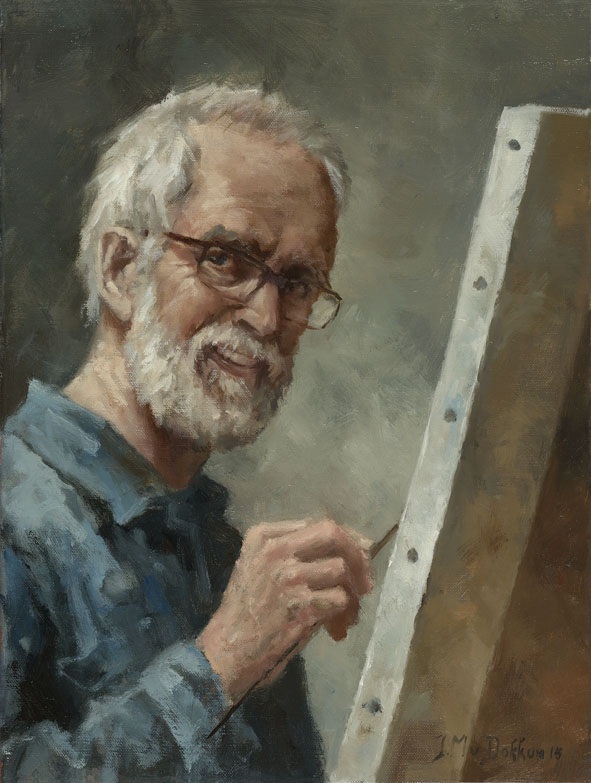